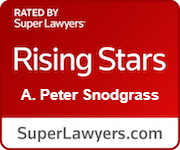 Peter Snodgrass grew up in Olean, New York, and attended Vassar College.  After graduating in 2003, he enlisted in the U.S. Army as a combat medic.

After law school, Peter was hand-selected by Congresswoman Kathy Hochul to serve as her Project Director, working economic development issues in her congressional district.

Besides working as an attorney at Collins & Collins, Peter teaches a class on community organizing at Buffalo State College as an adjunct professor.  He is also involved in community theater and serves on Erie County’s Arts and Cultural Advisory Board.

He lives on the West Side of Buffalo.