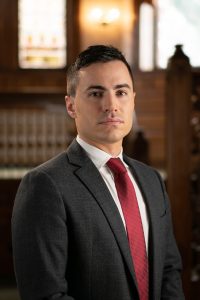 I have known since I was a young man that I wanted to help people who have been injured through no fault of their own.  It is an honor and a privilege to represent the men and women of Western New York in their personal injury and Workers Compensation cases.  I believe it is my sacred duty to out-prepare and out-work the other side to make sure my clients get the best possible result.

I graduated from the Georgetown University Law Center near the top of my class.  During law school I worked as a litigation associate in the large and internationally recognized firm of Arias & Munoz in San Jose, Costa Rica, where I gained experience handling all kinds of different cases in English and Spanish.  Following law school, I returned to Buffalo where I joined the firm founded by my grandfather.  We have been in the business of representing injured Western New Yorkers for over 75 years and know all types of injury cases, inside and out.